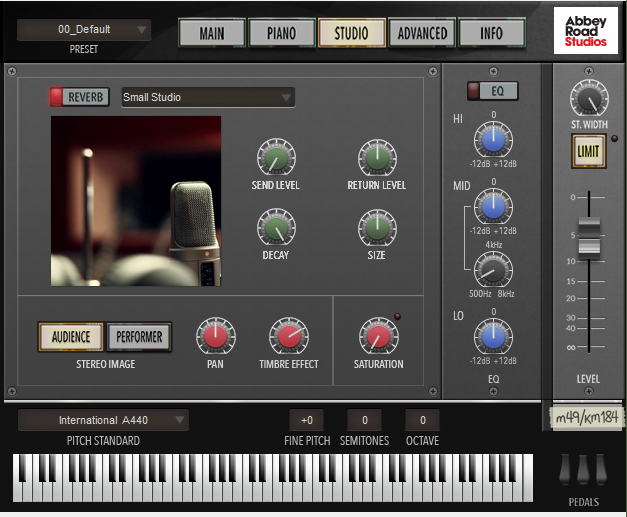 Captured in historic Studio One at Abbey Road Studios, the CFX Lite is a robust subset of the full, glorious CFX Concert Grand piano (compare both products here). Upon its release, the CFX Lite had some additional features and benefits that were not included in the initial CFX Concert Grand release. (This has subsequently been addressed in a free-of-charge update, details of which can be found here). Among these new additions was a somewhat mysteriously named “Timbre” feature, which I’ll address after a brief side trip back to 1960s London.

George Martin and the Beatles

The collaboration of producer George Martin and the Beatles played a major role not only in the history of Abbey Road Studios, but also in the history of recorded music. The music they created was infused with many unusual sounds, new to radio listeners, that were the product of experimentation with technology. These included tape loops, feedback, automatic double-tracking, tape reversal, and more.

While in most cases these weren’t techniques that no one had attempted before, the Beatles team embraced them, executed them really well, and brought them to popular music. Let’s look at one more technique they made good use of: the manipulation of tape speed.

There are several examples of Geroge Martin recording Beatle tracks at one speed and playing them back at another. Some of these experiments appear to have had different motivations than others.

In the case of “Strawberry Fields Forever,” Martin was faced with the impossible task of joining up two different takes, in different tempos AND keys, into one song. In my opinion, the level of success Martin achieved in “Strawberry Fields” owes equally to his genius and amazing luck (or divine intervention). For anyone else, on any other song, changing the tape speed to correct the tempo would not have magically solved the issue of two different keys. But I digress.

On “Rain” the tape speed was also altered but not, apparently, to solve a tempo or pitch problem. Both vocals and backing tracks were recorded with the tape machine running faster and then slowed down in playback to achieve a heavier, trance-inducing effect.

Similarly in “Penny Lane,” several instruments were speeded up on playback, including piano. While the end result is very different than in “Rain,” both experiments contribute to a subtle sense that something is slightly different; perfect for the consciousness-expanding mindset of the times.

For “In My Life,” tape speed manipulation BOTH solved a performance problem AND created a memorable sonic effect. By October 18, 1965, the song was almost complete except for the bridge. Reputedly Lennon asked Martin to contribute a piano solo, suggesting “something Baroque-sounding.” In the course of the next four days, Martin had dutifully worked up the Bach-inspired piece we all recognize, but experienced difficulty playing it up to tempo.

To compensate, he performed the solo at half speed, and his performance was recorded with the tape machine running at half speed. When the resulting tape is played back at regular speed, the solo is heard in sync with the other tracks, at full tempo. It also sounds an octave higher than played.

Not only was the pitch and tempo impacted, but the timbre had changed dramatically as well. In fact, many people have mistaken the track for a harpsichord, which masterfully suggests a “Baroque” connotation.

The timbre effect in the Garritan piano products allows you to achieve similar results, without a cantankerous tape machine (or white coated lab assistants to operate it). Turning the knob up (or clockwise), produces what I call the “In My Life” effect. The timbre sounds like a tape of a piano that has been increased in speed (but conveniently, without the increase of pitch).

Check out these examples to hear the difference:

Again, note that thanks to the dual miracles of programmers and the technology of zeros and ones, the pitch doesn’t change as you turn the knob, only the timbre (hence the name).

I hope you enjoy exploring the timbre effect, and the other powerful controls included in both of Garritan’s piano products. What’s more, I hope you find ways to use these tools that the Garritan developers never thought of – to take things a little further – and thus carry on the tradition of sonic experimentation.

In addition to being MakeMusic’s content manager, Scott Yoho is the leader of the Auto Body Experience, a horn-driven septet that plays his quirky music. He’s also a big Beatles fan.

A graduate of the Musicians’ Institute, he earned a B.A. in English from the University of Minnesota. Yoho played guitar with Rock and Roll Hall of Fame member Gene Pitney for ten years and has performed on stages as diverse as hay wagons, VFW basement floors, and Carnegie Hall.

Scott’s recordings have been featured in music magazines including Guitar Player, Vintage Guitar, and Keyboard, and he was once interviewed by NPR’s Terry Gross on Fresh Air.