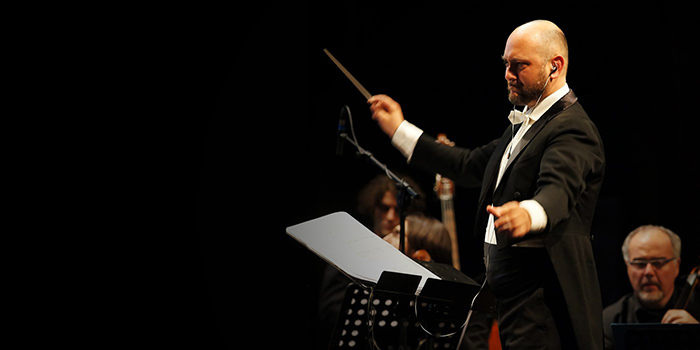 Francesco Marchetti is a composer, conductor, and orchestrator who lives in Rome, Italy. In addition to being a long-time user of Garritan libraries, he has also had a long association with the company. Gary Garritan offers this description:

Francesco is a conductor, arranger, and orchestrator par excellence; and one of Italy’s best composers. I met Francesco online back in the early 2000s. He composed excellent music with our fledgling library and his musical mastery really stood out. Francesco was one of our early beta testers and I asked if he would like to compose some demos. Those demos are among the very best done with our libraries.

Over the years Francesco and I developed a lasting friendship. My wife and I had the pleasure of visiting Francesco in Italy a few years ago and we learned that his musicianship is exceeded only by his hospitality. Francesco showed us around Rome and treated us to a wonderful home-cooked meal. He has a big heart and is very warm and inviting. It’s been a privilege and honor to know Francesco and count him as a friend.

Francesco recently accepted a challenge to create a short piece using a least one sound from each library included in the new Garritan Anthology. We spoke with him about his career and his long-time association with all things Garritan, and we share the new composition below.

Do you come from a musical family?

Yes, my father was an important Italian violinist. My mother played the harp and I have a sister who is an opera singer at the opera house in Rome.

When did you first suspect you wanted to be a composer?

Almost immediately, as soon as I started studying piano at the age of 12. I felt that music helped me to describe the world around me. I wrote small pieces dedicated to whatever I experienced: to a leaf, to the sea, to a journey; anything. I sat on the piano and anything caught my attention – I played it!

Did you have significant mentors in your life?

No one in particular. Some composers that have been particularly inspirational to me include Allan Holdsworth, Jean Michel Jarre, Vangelis, Gustav Mahler, Chick Corea, Bill Meyers, and John Williams. I know that they are all very different from one another, but in each of them I found something that I then incorporated into my path, making me what I am today. I have never placed one genre of music above others, but within every genre I have always embraced what I viewed as good and have discarded the rest.

Where did you study music? What was that like?

I studied piano and composition in the conservatory. I must say that classical training is really the basis. Sometimes it may seem boring and difficult, but in the end, you realize that it gives you all the best tools to make fully-developed music.

I see a lot of guys today who, having created two loops and a few low brass hits, consider themselves real composers. I would like to see these guys in front of a 120-piece orchestra while the bassoonist asks how to solve a phrasing issue at 56. It is something that you can not face if you do not have a solid preparation. And it is precisely by knowing the various instruments at this level that allows you to create a convincing virtual simulation.

Do you do more work as a composer, conductor, or orchestrator? Which do you prefer?

Most of my work has been –and continues to be – as an orchestrator and conductor in the movies. That is the world I love. However, I prefer to compose because this contains all three roles together. When I write I already have everything clear in mind before touching the keyboard, I already know what the orchestration will be, what the instruments I will use, and how the song should play.

How did you first learn about Garritan instruments?

In the early 2000s, computers were surpassing samplers like the Akai and the Emulator. The best libraries at that time ran on Gigastudio, but they cost a lot of money and not everyone could afford them. So when I saw Garritan Personal Orchestra (GPO) offering an entire symphony orchestra for only $250 … this was a revolution. I think I was one of the first people to buy it, and I was thrilled.

What was your introduction to Gary Garritan?

After buying GPO I made some demos that I sent to Gary. He liked what he heard and posted them on his forum to be judged by other users. It was a great success, both my music and the sounds of GPO were very well received. So Gary asked me for specific demos to demonstrate the various possibilities of the library, and our friendship was born.

Do you typically compose with a DAW, notation software, or?

I normally use Cubase, but when I have to write very complex orchestral passages I prefer pencil and eraser. When I see written music, I have a clearer vision of the evolution of a piece.

How much of your work is created with the idea that live performers will perform it?

Eighty percent of the music I create is eventually performed by real musicians. When I know that I will have an orchestra, I focus more on what the instruments can do and how they can perform at best, and I do not care much about the simulation. On the contrary, if I have to make completely virtual music I pay attention to all the details, from the breaths of the wind instruments, to the sound of the environment.

Have any tips to create more realistic sounds with DAWs?

Yes, as mentioned before it is important to have a lot of experience with real instruments to understand their possibilities and limits. As in painting: you can not draw a human body well if you do not know how the muscles and the skeleton are made.

Especially if you can not get direct experience, it is vital to listen a lot, to copy, and then to assimilate. The internet gives us this chance today. Obviously, it helps to have virtual instruments of a certain level to get a convincing sound, but if you follow this path you will get a good sound even with poorer libraries. In this, I feel that the Garritan libraries are the best in terms of quality/price. I have used Garritan libraries in many films, even very high-profile productions.

Let’s talk about the demo file you created with the Garritan Anthology:

What libraries are heard in the piece above?

The piece above begins with the CFX Lite and Classic Pipe Organs. Next, you hear Concert & Marching Band 2, which blends into Personal Orchestra 5 with Harps at the section’s conclusion. You continue to hear Harps over the Instant Orchestra section, which blends into Jazz & Big Band 3. Finally, we hear World at the very end.

So you used something from every library?

Yes! I tried to use as much as possible from every library. To use every instrument, however, would have created a feature-length piece! This demo was made in a single project, to demonstrate the consistency of Garritan sounds… Each part merges with the other naturally. I did not use any equalization, and all the reverbs are from the Aria Engine. I only added a compressor on the total mix to maintain good dynamics.

What was your experience in using the various libraries?

I know Gary’s libraries like the backs of my hands. This is not only because I have often collaborated with him during product development, but also because I  know well the personality behind his work. In any case, during the realization of this demo, I felt like a child at Christmas: every time I “unwrapped” a new library, it seemed more beautiful than the one before.

Garritan libraries are very efficient, light, and easy to use. The Anthology covers a vast breadth of genres and some sounds remain, to me, unparalleled today. One such example are the woodwinds in GPO 5.

The CFX piano is incredibly beautiful, you experience a great feeling of pleasure in playing it. Even though it is a lite version it’s incredibly detailed and the plug-in has a lot of features.

I believe the World library is the most complete of its kind: it contains instruments that I didn’t even know existed, and that are never found in other libraries. There are extraordinary instruments in both Organs and Harps as well. What I really like about Gary’s libraries is that, despite being easy to use, they reward a certain skill as a musician. You can open them, load the sounds and play them as they are, but if you know the secrets they become incredibly detailed and convincing.

What are some of the higher profile jobs you’re most proud of?

I was lucky enough to work with the biggest names in the world. I’ve done a lot of jobs, and right now I’m busy composing a soundtrack for a Hollywood movie, but I’m not saying anything yet.

Among the projects I’m most proud of, I can mention my collaboration – with some of the world’s greatest print publishers – for the orchestral sequencing of accompaniments for Harry Potter (where I used the GPO very much), and the virtual instruments realization of Andrew Lloyd Webber’s Greatest Hits (where I’ve also used the GPO a lot). Just think; Andrew sent me his original handwritten scores of Jesus Christ Superstar (and others) from his London office. It was a very powerful experience to place my hands on that kind of musical history.

In 2000 I orchestrated for more than 200 pieces for the “World Youth Day” during the celebration of the Jubilee in Rome, performed in the presence of Pope John Paul II, and broadcast worldwide.

But the thing I’m most proud of is having met and worked with Gary Garritan. Greetings from Italy to all the Garritan and MakeMusic fans!

Gary was right; working with Francesco is a pleasure. I enjoyed our interview and subsequent emails, and want to thank him again for sharing his experience with us.