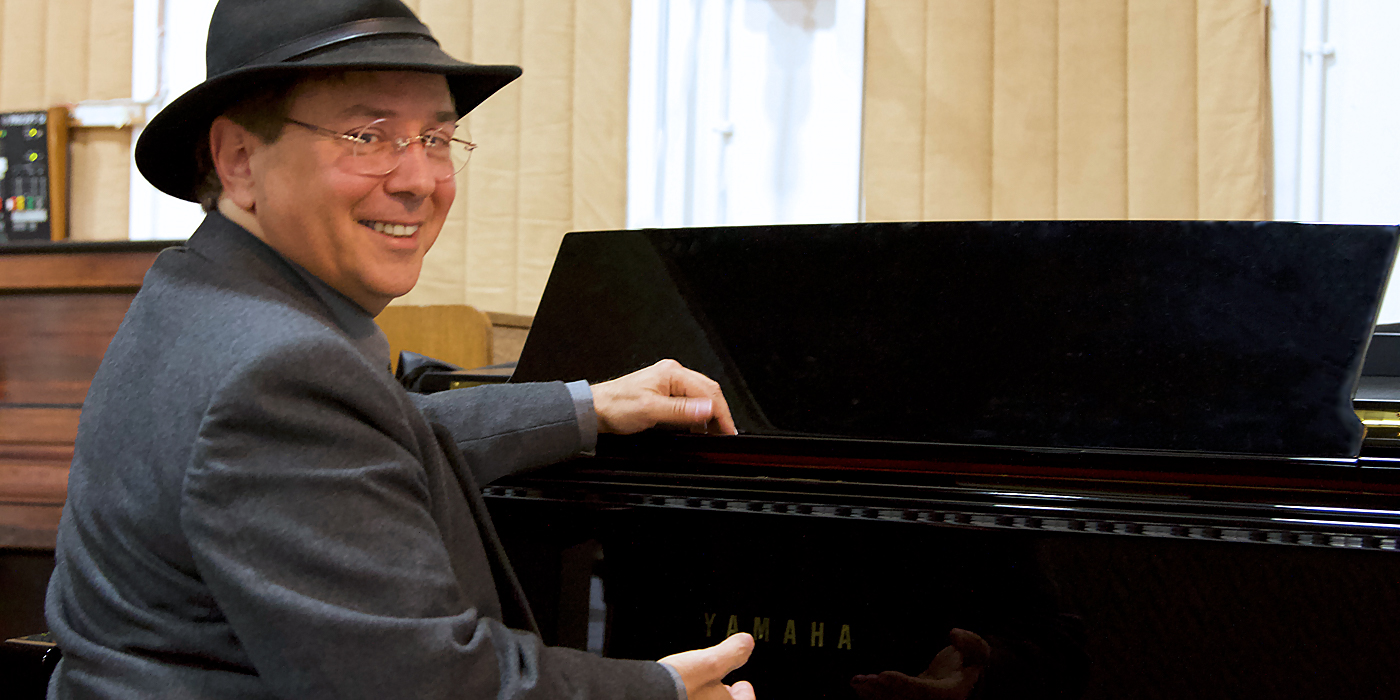 This year marks the 20th anniversary of the release of the first Garritan virtual instrument library. While twenty years at any pursuit is a remarkable accomplishment, in the world of music software it represents several lifetimes. To commemorate this milestone I spoke to the company’s founder, Gary Garritan, about his roots, some highlights of the last twenty years, and his reaction to the recently released Garritan Anthology.

What were your earliest musical experiences?

My parents always encouraged me toward music. My earliest musical experiences were taking guitar and accordion lessons at age 5 and taking up more instruments in elementary school.

I started a pop band at age 11 and then took classical piano lessons. As a teenager, I took harp lessons and realized that I found the perfect instrument for me. Also during my teenage years, I built a rudimentary synthesizer, some electric guitars, and attempted to build a tape sampler (like a Mellotron).

Did you ever have to choose between music and another life?

Yes, I did choose. I went to graduate school for applied math, graduated law school, and practiced law in New York for a short time. But deep down that was not what I really wanted to do. I had listened to others who told me “be a musician and you’ll starve.” My passion was music, so I followed my heart and switched careers to music.

Where did you study music? Did you have one or many mentors?

My music education was mostly private lessons. I also took music courses in college. I studied privately with some of the best harpists – jazz harp with Daphne Hellman, pop harp with Dwayne Fulton, South American harp with Atahualpa Poalasín, and took some country harp lessons with Louise Trotter.

Whose music most moved you?

Gershwin, the Beatles, the Moody Blues, Debussy, and the list can go on and on. However, what has moved me most has been the music that our customers have made with our libraries. We’ve had the pleasure of hearing thousands of musical pieces that might not have been created otherwise.

Can you provide us with some background about how you became a sample/sound developer? What was your first product, and when was it released.

After deciding to pursue a music career, my family and I moved from New York to a small island in the Pacific Northwest. It was a great place for being creative. I started playing harp for a living, recorded some albums and sold them on late night TV and at various fairs and festivals, events, and with distributors and retailers.

I wanted to bring the harp into the 21st century. I designed an electronic MIDI harp which my father built but needed some high-quality harp sounds for that harp. So I recorded every note of my concert pedal harp in multiple dynamics and with multiple techniques.

At that time, a revolutionary new sampler was announced called Gigasampler. This sampler allowed you to stream samples from a hard drive. It was a great leap forward and overcame many of technological limitations. Consequently one of the very first sample libraries for Gigasampler, known as the “GigaHarp,” was introduced in 1999. This started my career as a sample developer. (As fortune would have it, Gigasampler was later acquired by the Garritan Company.)

What was your next project after GigaHarp?

Since I had developed a harp library with the new Gigasampler technology, I thought, “Why not try something really ambitious using the highest-quality instrument samples with the new emerging technology?” As a recording artist I had used real orchestras to enhance my music. Orchestras even at that time could cost over $10,000 per hour. The options for musicians were few – either pay tens of thousands of dollars for a real orchestra or use keyboard samples or synth sounds where the quality of orchestra samples was not very good.

So we set out to develop an orchestral library and started with the string section, which usually comprises more than half the orchestra. At the time, there was no large streaming orchestral libraries. This would be a first.

Did you have any software development experience? If not, who did? Who made up your initial team?

I took programming courses and had some programming experience. But I needed the very best for the next step in the evolution of sample libraries and I assembled a great team.

My friend Frank Spitznagel was an artist in residence at Lincoln Center and he was able to assemble a large group of top-notch string players (violins, violas, cellos, and double basses) with Stradivaris, Guarneris, Gaglianos and stringed instruments of impeccable quality, instruments collectively worth millions of dollars.

I was introduced to Tom Hopkins from the folks at GigaSampler. Tom did some very innovative custom programming and his scientific approach impressed me. He was also quite an accomplished musician and composer. That started a ten-year collaboration, first as director of programming and eventually president of the company.

I also met Jeff Hurchalla, another brilliant programmer. Jeff figured out a way for this new project to work with both notation programs (like Finale) and sequencers by developing MaestroTools. This had never been done before and was a forerunner before plug-ins became vogue.

Another important part of our team were the beta testers. Having beta testers for sound libraries was unheard of at the time. Having a beta team helped us make a far better product from the start. Many ideas were incubated from the team.

Garritan Orchestral Strings became the first orchestral ‘super library’ introducing unique innovations that made orchestral sampling more playable and musical, including mod-wheel dynamics, pedal legato, randomization, alternation, key switching, and others. In addition to the high-quality samples, we added value by presenting the product and documentation in an elegant black cloth book with gold embossing. Each customer’s name was also included in the book because we believe that each customer is a creator of music and deserves special treatment.

The library was enthusiastically received by many high-profile composers and musicians. It was so innovative at the time that it received the 2002 Electronic Musician Magazine Editor’s Choice Award. In fact, it inspired an entirely new Editor’s Choice category for sample libraries.

Large orchestral libraries subsequently emerged some costing many thousands of dollars (which was way out of the reach of the average musician). A new kind of orchestral library was needed. Something had to be done. Someone had to do it and it might as well be us.

When was Garritan Personal Orchestra released?

Garritan Personal Orchestra was actually released in 2003. And I never thought it would still be going strong over sixteen years later. In software years, that’s an eternity.

What was your goal in creating Garritan Personal Orchestra?

I wanted a library for every musician – to democratize orchestral sampling. I wanted to create a library that was affordable, that required a small resource footprint, and that would contain all the usual instruments in the orchestra.

Everyone was expecting a mega-colossal library costing many thousands of dollars. Instead, we gave them Personal Orchestra – a complete orchestra for the computer for only a couple hundred dollars. GPO also included a sequencer (Cubase), a notation program, and the sample player.

The technology was advancing rapidly and plug-in instruments were making their appearance with no need to buy a separate sample player. We decided on the Native Instruments’ Kontakt platform which could be used as a standalone sampler or a plug-in to many DAWs and notation programs.

One goal was also to make the instruments playable and expressive in real-time. Tom developed a unique system of using a MIDI keyboard to simulate what real musicians do with their instruments. MIDI controllers were used to emulate various playability and aspects (attack, decay time, vibrato, timbral differences in dynamics, legato, note variability, portamento, and much more). We also developed a concept of “ensemble building” that allowed musicians to create flexible groups of instruments of varying combinations and sizes.

Personal Orchestra kept on improving over the years with more sounds and more features. Chad Beckwith, a brilliant programmer and sound designer, played a major role in this, programming Personal Orchestra 5 (and subsequent libraries).

How did your relationship with Plogue develop? What did they bring to the equation?

In 2004 there were many things we wanted to do with sampling. It became apparent that having our own sample player would allow us to innovate and do things that were not possible with existing players. We asked David Viens (who I regard as a genius) at Plogue Art et Technologie, Inc. to develop one for us. The result far exceeded our expectations. Having our own player was a natural progression and was an enormous benefit.

What libraries did you produce next?

In 2011 World Instruments was released comprising a large collection of ethnic instruments from around the world. This was followed by Instant Orchestra and several other libraries. Throughout this time, we also licensed some of our sounds to MakeMusic, Microsoft, Sony, Apple, Mackie, Yamaha, and various other companies.

You also produced piano libraries. Can you tell us about them?

Piano was our forte (pun intended). We were approached by Steinway & Sons around 2007 to develop the Authorized Steinway & Sons Concert Grand sample library. Our team recorded the first Steinway concert Grand at Troy Music Hall in New York. The second Steinway piano was recorded at George Lucas’ Skywalker Ranch.

Later, after we were acquired by MakeMusic, we entered into a partnership with Abbey Road Studios to record their Yamaha CFX Concert Grand Piano. Recording at Abbey Road was an experience of a lifetime. The CFX Concert Grand sample library won us our third Electronic Musician Editor’s Choice Award.

What were some of the big milestones for your company? What are you most proud of?

There are quite a few but here are some highlights that come to mind.