It’s a brave new world in music production today. The tools available to the common musician, which would have been unimaginable a few decades ago, have leveled the playing field like never before. With a little knowledge and attention to detail, we can create stunningly life-like soundscapes that rival the pros in all aspects. And the most amazing part is that we can achieve these results while spending only a fraction of the thousands (or tens of thousands) of dollars once necessary to do so. DAW programs like Reaper can go toe to toe with long-established giants while costing pennies on the dollar comparatively. And thanks to the Garritan sound libraries, you’re free to truly create the music once trapped inside your head, and you don’t have to take out a second mortgage on your home to do so.

While this article focuses on a few ways you can get the most out of combining Reaper with Garritan Personal Orchestra 5 (GPO 5), the tips offered are applicable to all Garritan libraries.

Music production has become an increasingly hybrid practice, both in tools and genre. It’s becoming more and more common for a film or TV score to feature such disparate sources as a gently-plucked acoustic guitar and a throbbing, sub-bass synth line within moments of each other (or simultaneously). Composers are seeking out new sounds—or new combinations of sounds—constantly in an ongoing effort to create memorable, affecting scores that are both unique and compelling. To this end, it’s advantageous to have a setup that fosters this type of creative sound-twisting, and that’s our focus here. The great thing about GPO 5 is that it allows you to decide how you want to use these phenomenal sounds: traditionally or not so traditionally. We’re going to focus on the latter here by setting up the library with multiple outputs in Reaper, allowing us maximum tone-shaping capacity.

So, let’s say you’re working on an experimental score, and you want to treat each of GPO 5’s instruments specifically for a unique sound. Maybe you want heavy compression on the percussion, and you want a slapback delay on the brass. And maybe you want to add a phaser on the strings and some oscillating tremolo on the woodwinds. Why not?

The problem is that you can’t just slap those effects on the track with GPO 5 if it’s set up with a typical stereo output because all of those effects will appear on all of the instruments. Of course, one solution is to add multiple instances of GPO 5, each one with only one instrument, and add the desired effect to each of those tracks. But there’s a better way.

We’re going to see how to set up GPO 5 so that each one of the 16 channels within the ARIA Player outputs to a separate track within Reaper. That way, you can treat each one to its own set of effects and then blend each to taste within the master mix. There are a few different ways to do this, but Reaper makes it very easy from the start.

How to Do It

GPO 5 is loaded into a project by way of the included ARIA Player sampler. This excellent player features a 16-channel mixer, many lush-sounding built-in reverb presets, and loads of instrument-specific controls. However, if you want to go beyond that and treat your strings to a delay or vibrato effect, for example, you’ll need to do so with an additional plugin outside of ARIA. That’s no problem: Reaper can help.

To add GPO 5 to a track in Reaper, you simply click on the FX button for that track and then select the ARIA Player with the “(Multi) (32 Out)” option. This will load the appropriate version of ARIA Player, allowing you to output each channel separately. 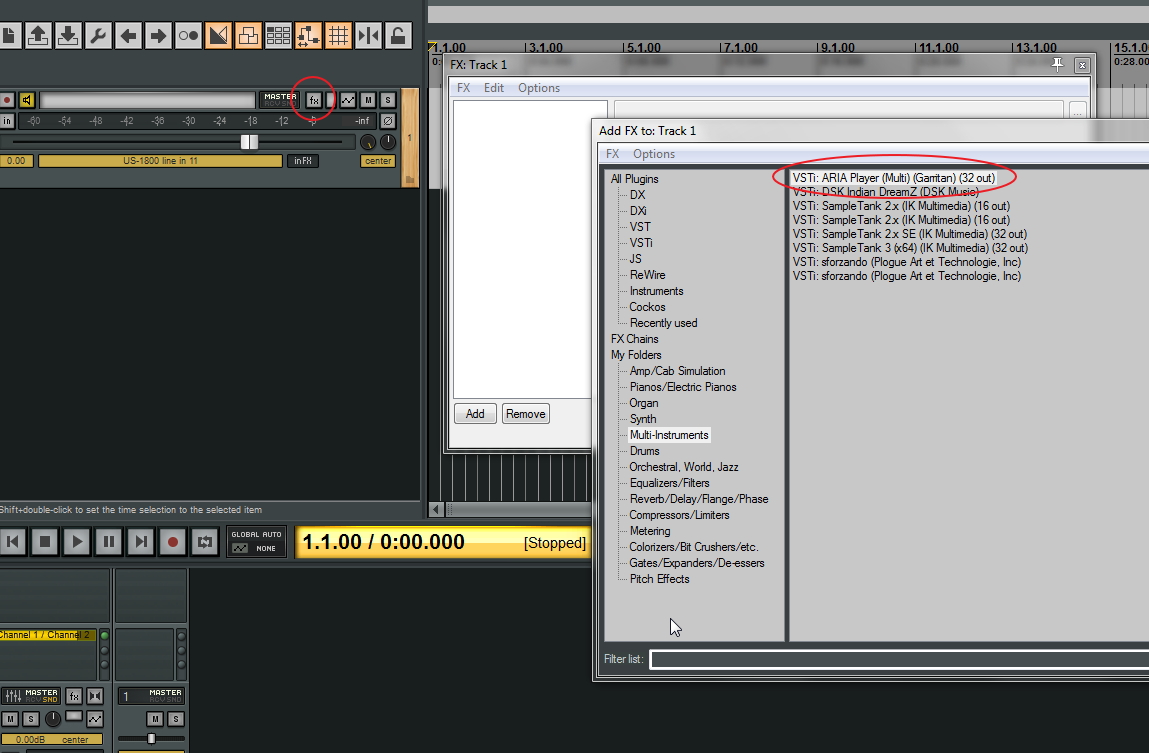 Once you see the ARIA Player on your screen, you’ll need to follow a few more steps in order to configure the multiple outputs. First, with the FX window for GPO 5 open, click on the Options menu and select Build multichannel routing of output for selected FX… A Build Routing Confirmation dialog box will appear, asking Do you want to add the following tracks to this effect? Select Yes. 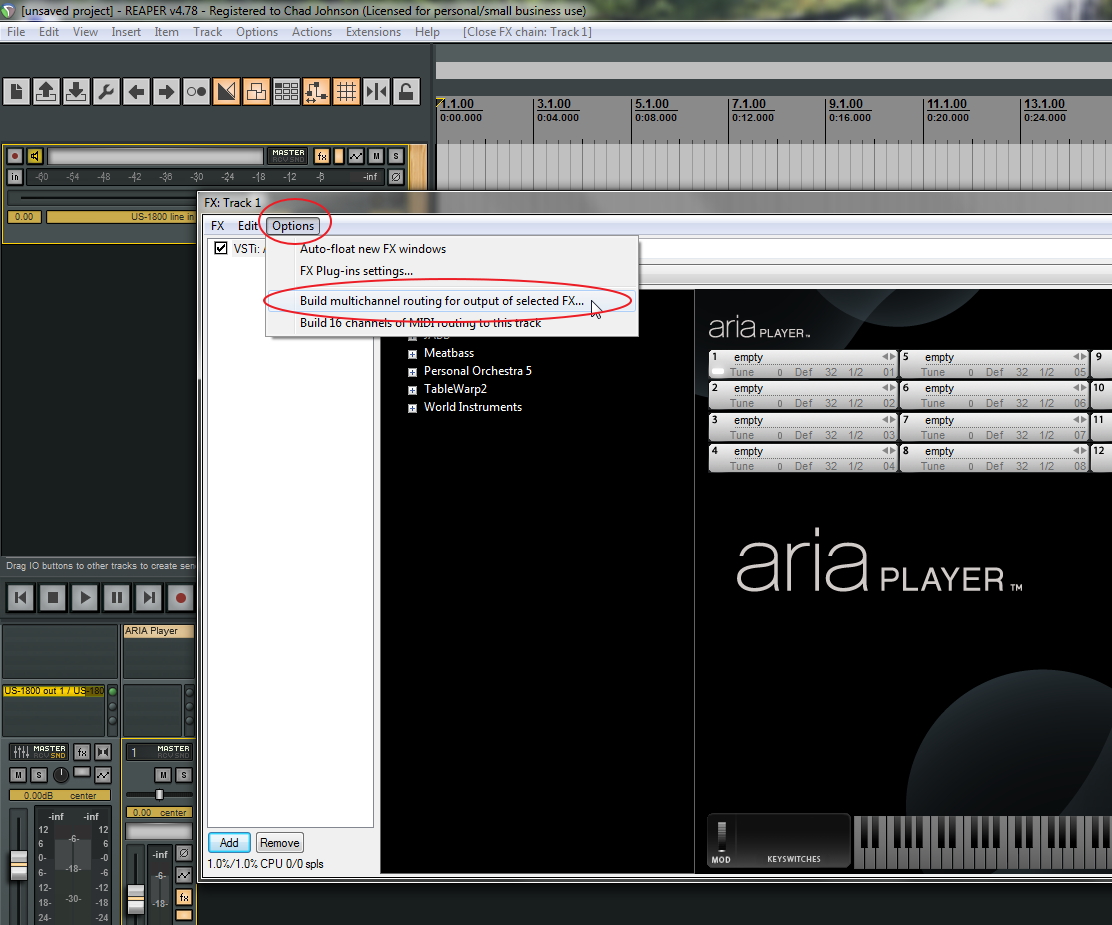 The MIDI numbers are fine to leave as is, but, in order to make this work the way we want, we need to assign each channel to the appropriate output. In other words, we want to assign Channel 1 in the ARIA Player to output 1/2, Channel 2 to output 3/4, Channel 3 to output 5/6, and so on, all the way down the line. You do this simply by clicking on the output numbers and selecting the desired output. 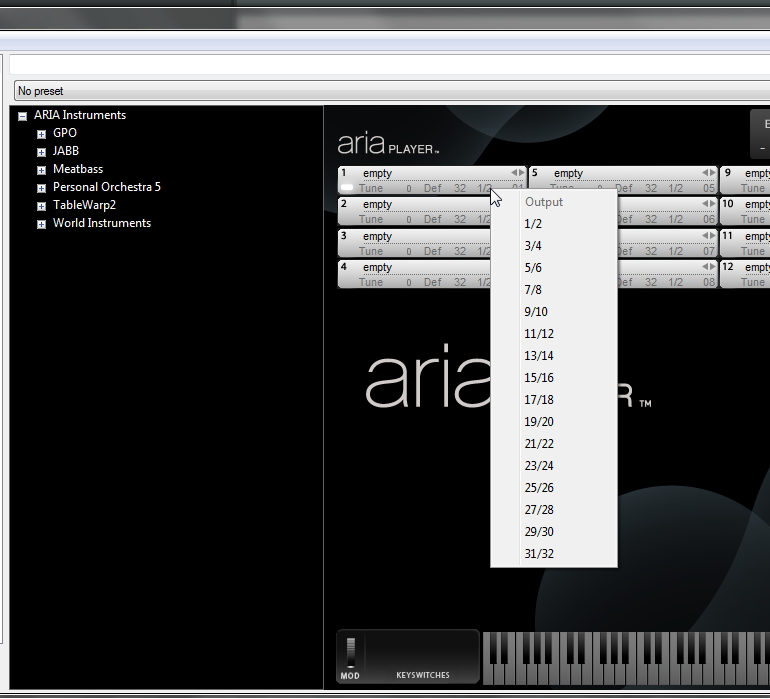 Once this is done, your ARIA Player should look like this. Notice that the outputs span from 1/2 to 31/32. 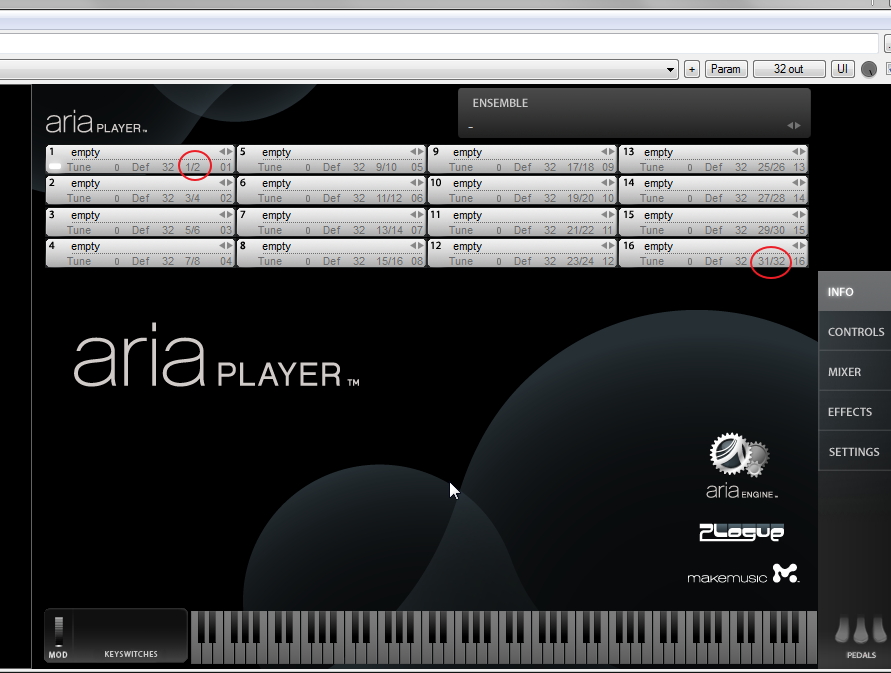 At this point, it would be a good idea to save this as a project template in Reaper so that you can instantly recall this configuration whenever you want. Select File > Save Project as Template and name it as desired.

The Fruits of Your Labor

And that’s it! You can now assign whatever effect you want to whichever instrument you load into GPO 5 without affecting any of the other instruments. In the example below, I’ve selected the “Woodwind Quintet” ensemble preset in GPO 5, and I’ve named the corresponding tracks in Reaper (Flute, Clarinet, Oboe, etc.) to make it easier to keep track of everything. Notice that each of the five instruments has a different effect assigned to it in Reaper, providing ultimate flexibility come mix time. 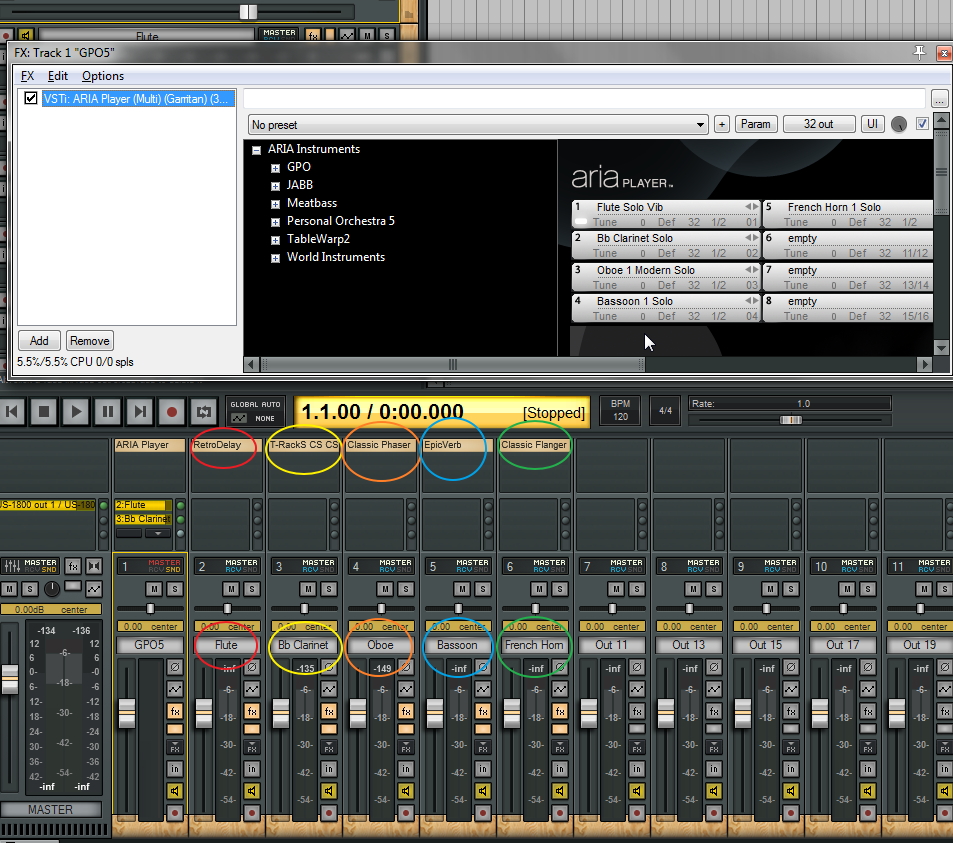 Keep in mind that this is merely scratching the surface of what you can do when combining these two powerful programs, but it’s a great start, and it may be all you need to create that one-of-a-kind soundscape you’ve been after. Who says you can’t add a wah-wah and fuzz pedal to an oboe? Enjoy the possibilities! 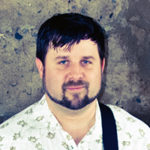 Chad Johnson is a freelance author, editor, and musician based in Denton, Texas. He’s authored over 80 instructional books for the Hal Leonard Corporation, covering a variety of instruments and topics, including Ukulele Aerobics, Guitarist’s Guide to Scales Over Chords, How to Record at Home on a Budget, and How to Build Guitar Chops, to name just a few. He’s a featured instructor on the DVD 200 Country Guitar Licks (also published by Hal Leonard) and has toured and performed throughout the East Coast, sharing the stage with members of Lynyrd Skynyrd, the Allman Brothers Band, and others.