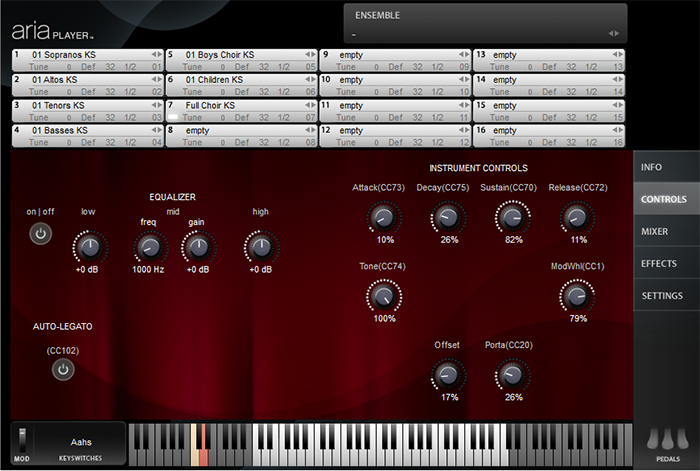 I’m really excited about the new choir sounds in Garritan Personal Orchestra 5 (GPO 5). In the past I’d typically write choral music on the piano (because I didn’t have access to a lot of vocal samples), so these additions are really welcome.

GPO 5 breaks the choir down into Soprano, Alto, Tenor, and Bass, and adds a Boys Choir, Children’s Choir, and a Full Choir. Every choir patch also includes additional controls and keyswitches. Plus, the new ARIA Player interface makes it quicker and easier to select the sound you want. Rather than navigating tricky submenus with a shaky mouse, you simply choose the sound you want from a list: 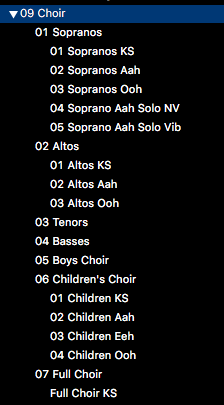 Today I’d like to share some tips to help you get started with these new choir sounds.

Check out the ARIA Player screenshot at the top of this post. Look for the two keyswitches, which allow you to choose between Ohs and Aahs in the Full Choir. The Ahs keyswitch is selected (indicated by the peach color) while the Ohs key is not (it’s pink). Press either key and it will stay selected until another keyswitch is pressed; there is no need to hold a keyswitch down. Note that the Children’s Choir and Boys Choir also include a third keyswitch for an “Eeh” sound, and that Sopranos also have a Solo NV (No Vibrato) and Solo Vibrato sound.

The new choir patches respond well to traditional velocity data from MIDI keyboards, but I find the choir works best with the ARIA Player’s mod wheel-volume configuration. If you’re new to this, no worries. You don’t need to need to configure anything to make your mod wheel function – it just works. Every mod wheel transmits a very specific piece of data called CC1, the on screen mod wheel will automatically receive this CC1 data.

Additionally, you are given full Attack, Decay, Sustain, Release (ADSR envelope) controls, which can be  automated. With the ADSR section, you’ll be able to shape how your choir sings their oohs and ahs. For instance, if you want your choir to sound more staccato, leave the Attack, Decay, Sustain, and Release values at 0. If you want the choir to sound more dramatic, set Decay and Sustain to 100, and increase the Attack and Release.

If you increase the Attack too much, your choir will always begin too late. Also, if you increase the Release too much, you’ll wait longer for the choir to stop singing. I like to think of Release as a natural reverb. While the look of these knobs and wheels may be a bit intimidating at first, a little experimentation will reap big benefits. You’ll get the hang of it in no time.

One of the most important things to take away is that the Mod Wheel and ADSR controls are completely independent of each other. The former is strictly volume and the latter is an envelope for shaping a sound.

While volume and envelope controls play a major part of any sampler or synthesizer, there are other controls that are less common but can also be found on many other samplers and synthesizers.

If you don’t already own GPO 5, expanded choirs and controls are not the only highlights. There are many new features as well as a host of additional sounds; check out these audio demos. GPO 5 is now available for $149 directly through MakeMusic or via your favorite music retailer.

I find myself using GPO 5 more and more in my own music projects, and you probably will too. I hope these tips inspire you to experiment with the choir (and other) sounds in GPO 5. 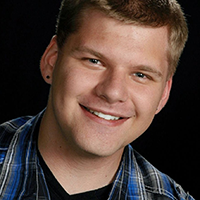 Nick Morris is part of the MakeMusic Customer Success team, originally from Minnesota and now relocated to Colorado. He graduated from McNally Smith College of Music, receiving his B.S. in Music Production.

Nick enjoys finding new music to listen to and designing sound patches in his free time.