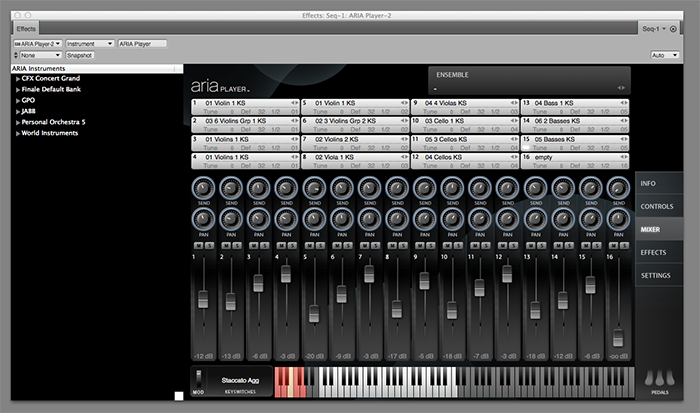 As a string player I am most excited about the new strings in Garritan Personal Orchestra 5 (GPO 5). With multiple bowing samples for each instrument, a fluid live-friendly playback engine, and the choice between individual, chamber and section string sounds, GPO 5 has a lot to offer those of us who focus on strings.

Bowing is too often overlooked in orchestral sound libraries. There’s a noticeable sonic difference between the many techniques a string player uses performing. Listen to the differences in this short example:

What you’re hearing is a violin playing a major scale – first as slow, sustained notes, followed by martellato, spiccato, staccato, and finally col legno. Notice how each technique has its own unique articulation and tone. Many composers use these bowing techniques in their scores, but can’t always use them in their MIDI demos. Thankfully, GPO 5 delivers these without the hassle of huge load times or an over-complicated interface.

While on the topic of ease-of-use, let’s take a look at how I created this sample.

An Instrument of Change(s)

One of my favorite things about the GPO product line is how natural it feels to play on a MIDI keyboard. GPO 5 is no exception. Using a combination of low-octave key-switches and control change messages, writers and performers alike can evoke a huge range of tonal colors.

I created the previous scale example by simply playing a major scale multiple times, and using keys in an octave below the instrument’s range to choose a new bowing technique. That’s it! No loading new samples, no switching between multiple channels and tracks. In a word – no fuss.

As you can see in the image above, the red keys on the ARIA player’s on-screen keyboard represent available key switches, and if I press one of these keys while playing, it will highlight yellow. This makes it really easy to use multiple sounds at the same time, even while playing live. To my fingers, using a MIDI keyboard feels similar to using preset keys on a Hammond organ.

Control change messages are also a common way to change the sound of the instrument you’re playing. These are usually controlled by programmable knobs and faders on the face of the keyboard as well as by your keyboard’s pedals. These messages can control volume, pitch, tone as well as additional techniques like flutter-tonguing and keyboard pedaling. With Orchestral Strings however, these controls are a little simpler. You have basic envelope controls (known as ADSR), a tone control, and my favorite feature: legato controls, including automatic legato.

How do the legato features work? In the Orchestral Strings patches your keyboard’s sustain pedal can be used to restrict the instrument to only one note. When you play another note, the instrument seamlessly moves to that new note with a legato effect. This makes it very easy to simulate slurs and slides on the fly, even while playing a keyboard in a live setting. Automatic legato is a setting which causes GPO 5 to automatically press the pedal for you.

Suppose you’re writing a beautiful piece for a small ensemble. While working, you decide you want the closer, more personal effect of a chamber ensemble but your string samples sound like a full-blown symphony. Normally this would leave you with a tough compromise – until now.

GPO 5 includes full instrumentation for solo instruments, as well as both large and small string sections. This makes it easy to move from small quartet to big Sinatra-style string sections, and everywhere in between.

In this example, I’ve started with a basic string quartet, built into a small sectional, and finish with a full orchestra.

Add It All Together – One Piece at a Time

A common technique in making MIDI mock-ups is to layer string patches with individual samples as well. It takes up a few extra spaces in the ARIA Player, but I think you’ll find the end result to be very rewarding. Here’s one of my favorite compositions from Antonin Dvorak, played by the Garritan Personal Orchestra:

I hope you’ve enjoyed this brief tour of some of the string features that I find most interesting in GPO 5. If you’d like to hear more of this library, be sure to check out the audio samples on the GPO 5 audio demos page. 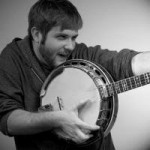 Peter Flom is the Production Manager of Repertoire Development at MakeMusic. A graduate of the Berklee College of Music, Peter has previously worked at KMA Studios in New York City, and in MakeMusic’s Customer Support department. He now spends most of his days developing new content for Finale and SmartMusic.

Peter is also a freelance arranger and engraver, and plays a mean guitar when nobody’s watching.