U2 in Concert and our ‘behind the scenes’ backstage tour

On December 19, 2005, I attended the U2 concert at the Rose Garden Arena in Portland. This was the final show of the North America tour and over 20,000 people came from all over for this sold-out performance. It was also a special occasion since this was day the Time Magazine ‘Persons of the Year’ issue hit newsstands naming U2’s Bono (and also Bill & Melinda Gates) as the recipient of that honor.

Anyone who has been to a U2 concert during this tour has heard the sounds of Garritan Personal Orchestra interspersed throughout the show.

Jeff and I had the pleasure to spend some time with Terry Lawless who plays keyboards and performs for the group. Terry gave us a backstage tour and introduced us to many of the crew.

There’s a great deal that goes into making such mega-concert happen as you probably know.

We saw the elaborate lighting systems. U2 has specially-designed lighting which does all sorts of things. It’s huge and does all sorts of incandescent pyrotechnics. Combined with the rest of the light show it was pretty spectacular.

We saw the instruments the group takes with them. Terry showed us the band’s 46 guitars he takes on tour with him. There are his favorite guitars, then back up guitars and backups for the backs ups. We also saw a fair amount of bass guitars. Here’s a picture of his guitar array: 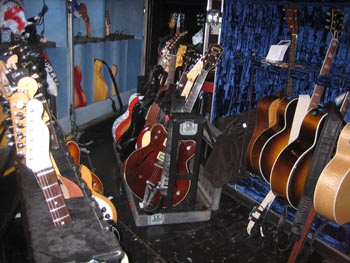 Jeff and I were privileged to see the mixing room where the show is run through four mixing consoles. The DAW that they were using was Nuendo. 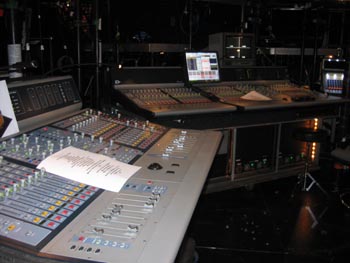 Speaking of backups, the entire production feeds into Uninterruptible Power Supplies (the largest I have ever seen). These UPS units stand about three to four feet high and can run the show for a brief period in the event of a blackout. Here’s a picture: 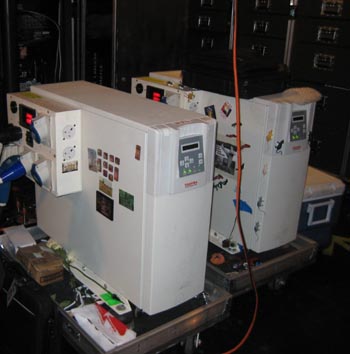 Terry showed us the various keyboards he uses (Roland, Yamaha and Kurzweil) and his rack gear. Here’s some of his keyboards and Garritan Personal Orchestra loaded into Receptor and ready for the show. 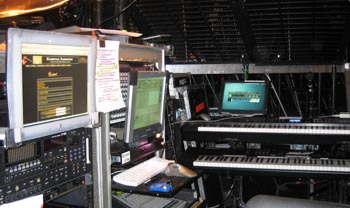 We went onto the stage and saw lots of racks filled with gear, drums and various instruments. Being on stage one can appreciate the enormity of the arena. 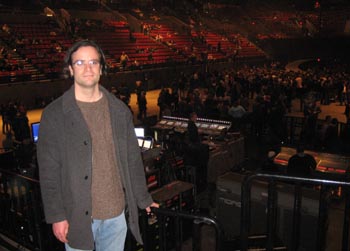 Jeff Hurchalla at the Rose Arena – ready to rock out for the show.

Let me tell you a little about Terry. Terry Lawless has been on tour with U2 for the past two years playing in many venues with the group. Prior to U2, Terry was on the road with Cher for 2-1/2 years. He has appeared on the Tonight Show with Jay Leno, Late Night with Konan O’Brien , Saturday Night Live, Grammy Awards and many other shows. He has performed and programmed with Bruce Springsteen, Chicago, the Backstreet Boys, Janet Jackson, Phil Collins, Boston, David Bowie and others. Terry is an amazing keyboard player and programmer.

Here is a picture of Terry and I. You will see GPO on the screen above the keyboards. I was very excited that Terry chose GPO to use in the U2 concerts. 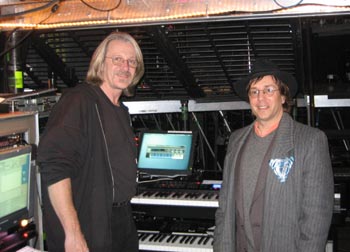 The opening act was Kanye West. What was interesting about this rapper was that he was accompanied by a string sextet (2 cellos and 4 violins) and a harp (a very nice Salvi too). Chamber rap – very interesting. 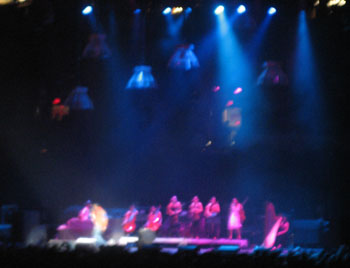 After the opening act, U2 came on the stage and multi-colored confetti came down in front of enormous curtains of cascading light. The blending of stage lighting and visual displays were simply bedazzling! 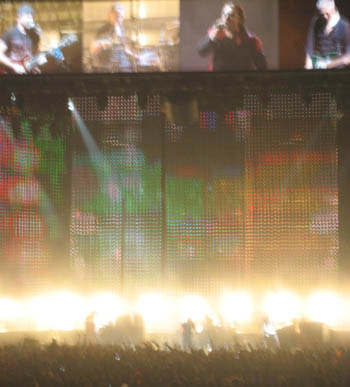 The Song List (for you U2 fans) was:: City of Blinding Lights, Vertigo, Elevation, I Will Follow, I Still Haven’t Found What I’m Looking For – In a Little While, Beautiful Day – Happy Christmas, Original of the Species, Sometimes You Can’t Make It On Your Own, Love and Peace or Else, Sunday Bloody Sunday, Bullet the Blue Sky, Miss Sarajevo, Pride, Where the Streets Have No Name, One, Help, and Instant Karma/Happy Christmas (War is Over). For their Encore they did: Until the End of the World, Mysterious Ways, With or Without You / Happy Birthday, Yahweh, and 40

“I Still Haven’t Found What I’m Looking For” was one of my favorites and “Love and Peace” was instantly recognizable. U2 also did a celebration of John Lennon and performed “Instant Karma”.

It was fantastic seeing Bono walk around the illuminated elliptical walkway through the cheering crowds: 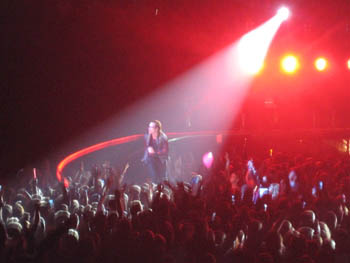 At one point Bono donned a bandana and blasted away on the drums taiko-style. The crowds loved it. He even took off his trademark sunglasses for one song. 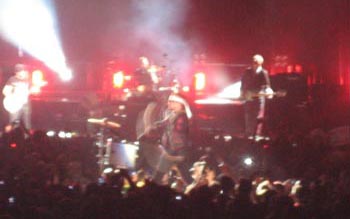 There was also a sea of signs being held up by the crowds reading ‘Thank You’. It was obvious that the band appreciated the signs.

Bono’s interaction with the crowd was magic and made this show special. Amazing how together a crowd of 20,000 people can be. The fans knew every lyric and having a good time. Bono and the band seemed to really enjoy themselves. Simply an amazing show

I really admire how Bono is using his music and his fame to draw attention to poverty in this world. He is making this world a better place and his his being awarded “Person of the Year” in recogition of what he is doing. 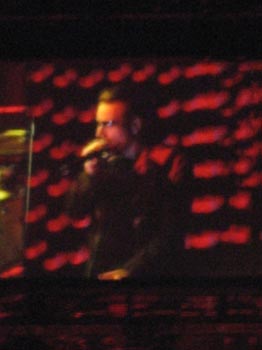 Jeff and I really had a fantastic time and wish you too (U2) could have been there . It was an honor to have Personal Orchestra a part of the concert. Thank you Terry.