Our ‘Behind the Scenes’ Tour

We were honored to be invited by Garritan Library user Yves Frulla to see Céline Dion’s ‘A New Day’ Show and take a backstage tour. One of the best shows I have experienced. This particular show marked the 600th show since it first started in March of 2003. “A New Day’ has been one of the most successful concert show in history and certainly the most popular in Vegas.

From her humble beginnings is a rural French Canadian village, Céline Dion has risen to international stardom and has already sold over 155 million albums worldwide, making her the biggest selling female artist of all time. Nearly 2,500,000 people have seen this Las Vegas show to date. Upon finishing in December of 2007, the show is expected to gross approximately $400,000,000. 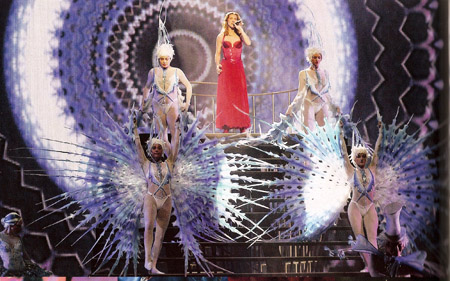 The experience begins when you first set foot in the theatre. Inspired by it’s Roman namesake, the Coliseum at Caesars Palace is spectacular. The Coliseum was built just for this show. At a cost of nearly $100 million dollars, this 4,148 seat facility has a feel that is both spacious yet intimate. And the sound of the room was fantastic. The stage is sloped (like in Roman times) which makes the view better for the audience but more difficult for the dancers.

The show had great sets lavishly mixed with multimedia making a visually stunning extravaganza – almost like watching a dream. Dancers float and fly mid-air in an ethereal and surreal way across the stage. Gigantic props and large objects, such as a grand piano and large musical instruments, float across stage in mid air. 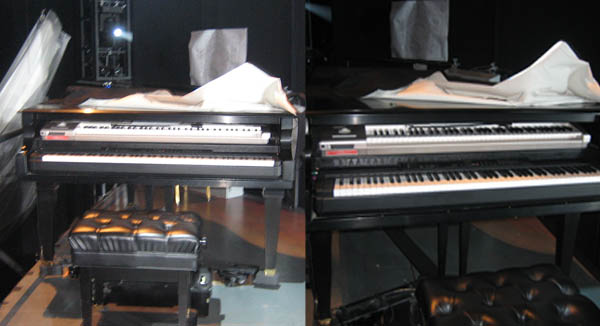 A grand piano floats mid air across the stage while being played.

The stage is dominated by a mammoth 120 foot by 40 foot high LED which spans along the back width of the stage. It is the world’s largest LED screen and was built especially for the show. This huge screen is used throughout the show creating a constantly-changing backdrop of high-definition imagery transporting the audience exotic places and interacting with the props and the happenings on stage. Visually stunning! The screen consists of many panels that are locked together to make one seamless screen. Up close to the screen you can see the array of dots, but back in the audience the images appear high resolution. 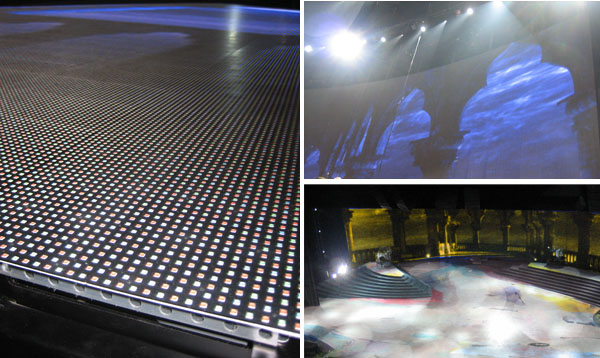 Close up on the large LED screen and some of the images shown on the screen.

The Musicians and Performers

The star of the show is, of course, is Céline Dion . She brings grace, charisma and magic to the show and after a few minutes one can understand why she is a superstar in the music world. Her unmistakable voice is sublime and she interacts well with the audience. She sang some of her greatest hits as well as beautifully-arranged standards.

Céline is joined by a cast of sixty performers, musicians and vocalists – including lead musician Yves. They bring humanity back to the show and keep the show from being just a technical marvel.

The music made the show. The musicians, most of whom have been touring with Céline for many years, are first rate. They include background vocalists, keyboardists (including accordion), flutist, cellist, violinist, drummer, bass, percussionists, pianist and guitarists.

One of the highlights of the show was watching Yves Frulla perform. Yves plays keyboards and handles the orchestral arrangements and adaptations from the recording to live performance. Often the arrangements are transposed to accommodate Ms. Dion’s voice. He is from Montreal and started with Céline Dion in 1990.

During the show, Yves went on stage and played accordion together with Celine singing. A very breathtaking duet! When not onstage, Yves was in his own area that is always visible in front of the the right of the stage.

Yves has a 3 keyboard rig which he plays throughout the show. One keyboard is is a Yamaha KX76 and the other two are Yamaha KX88s. On the floor is an array of foot pedal controllers which are mapped with an Opcode Studio 5.

Yves’ keyboard rig and a picture of Yves next to his keyboard station.

Yves uses hardware in the show, rather than computers, because they are reliable and stable. With a multimillion dollar hit show you do not want a computer crash. Almost zero-latency during real-time play is also an important factor.

Most of the orchestra (except for the live violin, cello, flute, percussion players) is sampled. For the string sounds, Yves uses a special version of the Garritan Orchestral Strings. A light version of GOS was ported over to the Yamaha keyboard and programmed and tweaked by Yves. He mapped the sustains, short bows and pizz to suit his working style.

Because the show is carefully synchronized with moving props, video, and choreography; click tracks are used on most of the songs. There’s a camera and monitor to the right of the keyboards so Yves can see what is going on at all times.

Mid-center in seating area of the Coliseum is the mixing pit. A 96 track SSL mixing board occupies this area and is run by the show’s house mix engineer Denis Savage. This is where all the music for the show is routed and levels are set.

Engineer Denis Savage next to the SSL console located in the Coliseum.

Pictured right: Coliseum showing where the mixing area is.

On the second floor of the Coliseum is a control room dedicated to just the wireless microphones on stage. In this room there are racks and racks of outboard gear and a Yamaha DM2 mixer. Everything is recallable and programmed for every song. A sophisticated Meyersound speaker system is also used in the show.

The Wireless Room that controls all of the onstage microphones.

Racks of audio gear used for the show.

The floating and moving props are mechanized. Throughout the show things rose from the stage (like various musicians) and descended from above. For example a drum kit descended from the ceiling or a large tree grew from the floor or a piano appeared.

Descending drum kit (must be quite a ride for the drummer).

All of these things were mechanized with the use of computerized hydraulics. A hydraulic room is located below the stage and controls all of the moving props.

Hydraulics room and descending props from the ceiling.

On the third floor is a clock room where all of the time code is generated and everything is synced together. A Mac G4 serves as the master clock and generates the time code rendered to sync to video. Digital Performer is used to run the time code for the visuals. 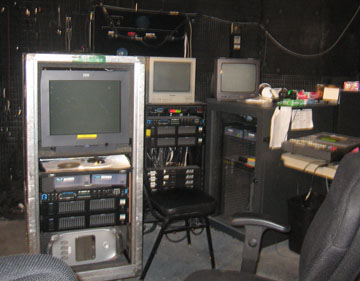 The clock room on the third floor.

A lighting control room is located on the fifth floor and is dedicated to controlling all the lighting for the show.

Backstage are various music areas for other musicians to play and to house all the various instruments.

Guitar room and one of the percussion rooms.

The Wireless Room that controls all of the onstage microphones.

At end of show Yves held Céline Dion’s hand in the line-up for the final bow. What a fantastic show – an extravagant mixture of concert, dance and eye candy. Thanks again Yves for this incredible experience. And thanks to your production department for permission to post this report.

The show will end December 2007 and then Céline, Yves and company go on a worldwide tour. Good luck with the remainder of the show Yves.

I urge everyone to see this show before it is over. It is an unforgettable experience.